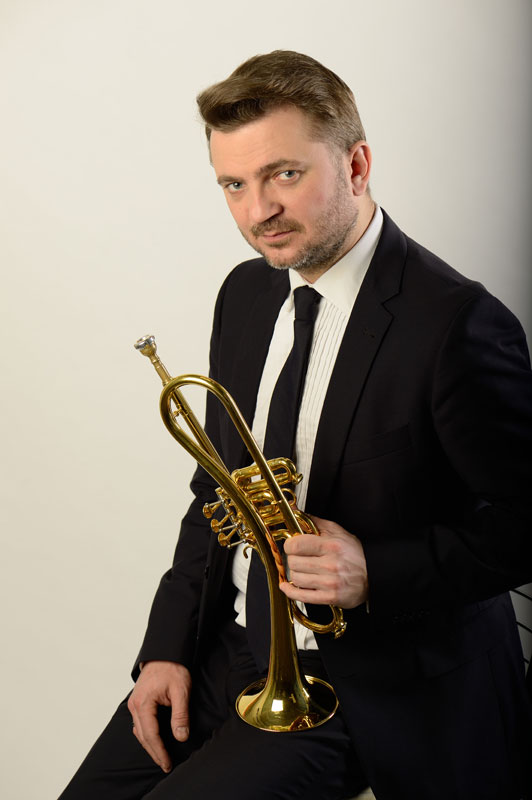 Vladislav Lavrik, one of the most talented musicians of his generation, is Russia’s finest trumpeter and a rising young conductor. Vladislav is artistic director and chief conductor of The Tula Symphony and The Chamber Orchestra of Orenburg Philharmonie. Recognized for achievements in both classical and jazz performance styles, he was appointed principal trumpet of the Russian National Orchestra at the age of 20, the youngest person to hold a principal chair in the history of the orchestra.  Since 2008 Lavrik has been a professor of the trumpet faculty of the Moscow State Conservatory.  In 2011 he was elected to the board of the International Trumpet Guild, the first Russian to be given this recognition and responsibility.  In 2016 he received the Russian Presidential Prize for Young Artists, the country’s highest honor for young artists.

In 2010 Lavrik achieved his conducting debut with the Russian National Orchestra at Tchaikovsky Hall in Moscow.  Since then he has led the RNO in its regular concert season and in festival concerts, including the 2014 program dedicated to Serge Kussevitsky.  Mikhail Pletnev, the RNO’s founding conductor, invited Lavrik to the podium for his 2012 return to the concert stage as solo pianist, and Lavrik again led the RNO with Pletnev as soloist in their 2015 concerts in South Korea, Hong Kong and Japan.  The 2013 Minnesota Beethoven Festival marked Lavrik’s American conducting debut, leading the RNO in Beethoven’s Symphony No. 6.

Born to a family of musicians, Lavrik’s early training included both piano and trumpet.  After   completing the Master’s Degree in trumpet performance at Moscow State Conservatory, he completed the opera and symphonic conducting program at the Gnesin Academy of Music, where his major professor was Maestro Vladimir Fedoseyev. Lavrik has also studied with Horia Andreescu, Teodor Currentzis, Mark Elder, Neeme and Paavo Jarvi, Vladimir Jurovsky, Alfredo Naseda, Vassily Petrenko, and Mark Singer.  In 2014 he was invited to assist Maestro Kent Nagano leading the Montreal Symphony Orchestra, preparing Saint-Saens’ Symphony No. 3.  On several occasions Lavrik has led the Gnesin Academy Opera Series in Tchaikovsky’s Evgeny Onegin.

Lavrik is an organizer and leader of brass music festivals and ensembles, as well as a sought-after member of trumpet competition juries in the United States and Europe.  He is founder and artistic director the Russian National Orchestra Brass Quintet and of the International Brass Days Festival of the Moscow State Conservatory.   In recent Brass Days festivals Lavrik has premiered new arrangements by Evgeny Ratner of Mussorgsky’s Pictures at an Exhibition and Tchaikovsky’s 1812 Overture, conducting a large brass and percussion ensemble in the Great Hall of the Moscow Conservatory.

As a conductor and trumpet soloist Lavrik is actively involved in music projects for children, including the RNO’s established series “Magic of Music.”  During 2011 and 2012 he visited orphanages and special schools in the United States and Russia with a program of music therapy for children with disabilities.  In 2013 he both conducted and performed in premiere performances of the children’s musical Hermitage Cats Save the Day by Chris Brubeck in Washington, DC, Tuscaloosa, Alabama and St. Petersburg, Russia.  His recording with the Russian National Orchestra of Alexander Rosenblatt’s Alice in Wonderland with narrator Alexander Oleshko was released in 2013.   In 2011 he released a solo album “Meditations” featuring music by Russian composers.